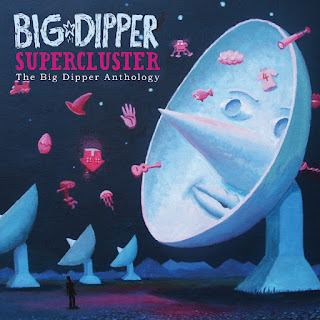 Big Dipper are a Boston-based indie band that blends 80s jangly guitar pop with edgier post-punk, arriving at a sound that's pretty much the definitive vibe of mid/late-80s college radio sound. They've also got some wickedly fun lyrics and killer hooks that should've taken them out of that narrow niche into broader alt.rock acceptance, but them's the breaks, I guess. A supergroup of sorts, the band was formed by a few refugees from the Volcano Suns (itself an offshoot of sorts from indie legends Mission of Burma) and the singer from Kansas indie act The Embarrassment--and if you're familiar with any of those bands, you should have a sense for what's in store.

While I try to stick to proper albums in this space and avoid compilations, 2008's Supercluster is a pretty great collection of out-of-print releases and unreleased material. You get their debut EP and first two albums, joined by loads of bonus tracks. The generous 3-CD set collection skips over 1990's Slam, the final LP from the band's initial run (which was released on a different label), but adds the recordings for a post-Slam album that was shelved and never released.

The earlier material here is a bit more challenging, but there are some great tunes, particularly the rollicking, percussive "Wrong In The Charts" and the jaunty, Minutemen-like "Man o' War." Later on you get one of my personal favorites, "Ron Klaus Wrecked His House," totally loopy fun that calls to mind Too Much Joy; while "Meet The Witch" shows their knack for a more downbeat, melodic pop tune.

You can buy it on Bandcamp.

Twenty years after breaking up, they regrouped for 2012's Crashes On The Platinum Planet, which is surprisingly great and worth checking out.