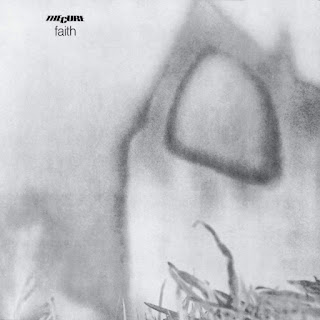 As long as I'm in Depressing Album Mode (see yesterday's nod to Lou Reed's harrowing Berlin), figured I'd spend a little time with one of my favorite Cure albums. Before developing the balance between sophisticated pop and atmospheric moodiness that would characterize most of the band's work (best captured on 1989's excellent Disintegration), Robert Smith penned a trio of intense, downbeat albums--1980's Seventeen Seconds, 1981's Faith, and 1982's Pornography. All are great, if a little hard to take in anything but small doses.

I'm partial to Faith, which includes some of Smith's loveliest, most ambient-ish ballads, most notably "All Cats Are Grey," "The Funeral Party," and "The Drowning Man"--which, titles aside, aren't simply dark so much as deliriously relaxing, the sort of tracks I invariably turn to when insomnia strikes. Not that the album is devoid of more upbeat moments--both "Primary" and "Doubt" move at a quicker clip, though they're still a far cry from the pop songs Smith magically conjures up on later records.

Of course, while the original album serves as an able soundtrack to rainy nights alone at home, it's nothing compared to the extended instrumental track, "Carnage Visors" (originally composed to accompany a now-lost animated short), which is appended to the CD reissue. Sounding like a goth remake of a Brian Eno ambient composition, "Visors" just reeks of despair even without lyrics; listen at your own risk.

Audio rip for "All Cats":

Here's a live version of "The Funeral Party":...and "The Drowning Man" live:And hey, what the hell, let's go nuts with a creepy video for "Carnage Visors":