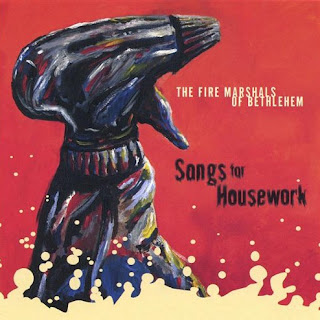 Here's an obscure little treat for my fellow jangle-pop lovers. I've talked before about my love for 1980s/1990s Austin jangle pop act The Reivers (whose work, though long out of print, is now available on Spotify, and who will be the next band I cover on Toppermost). After that band's final LP, 1991's excellent Pop Beloved, frontman John Croslin put together a new band, drawn from other players in the Austin scene. Like the Reivers, the Fire Marshals of Bethlehem offered Americana-tinged jangle pop, again highlighted by shared male & female vocals (with Julie Lowery taking on the role of Kim Longacre). And while Longacre's gorgeous croon was a tough act to follow, Lowery is... well, strikingly similar, making this record (and its equally great 2009 follow-up The World From The Back Seat) essentially a continuation of the Reivers.

In some ways, Songs For Housework is a little better than some of the Reivers' later work; Croslin's flirtations with more rocking tunes, which could be hit or miss, are largely gone, returning the sound to mid-tempo guitar jangle. The album may lack the drop-dead stand-out track (maybe "Dear Hateful," which really drives home the similarity between Lowery and Longacre), but it's wonderfully consistent, thoroughly enjoyable from start to finish. Even better, Croslin is more willing to take a back seat on vocals, and while I always enjoyed his leads with the Reivers, I'm more a sucker for the female vocal parts here, which get a much more prominent role.

Sadly, the Fire Marshals didn't find any more success than the Reivers, which is just absurd, but what can you do? The album can still be found on Amazon, and it (and its follow-up) both stream, so get listening!