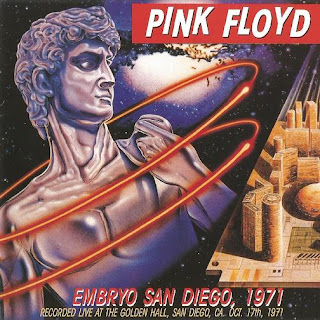 Ok, I'm back after a brief vacation. And I thought I'd mark my return by noting a recent data-dump of early '70s Pink Floyd bootlegs to streaming media, which is kind of a cool development for us music nerds. Obviously, if you're not a fan of early Floyd, or boots, move along and I'll drop something wholly different tomorrow. But for the rest of us... damn.

This happened without any official fanfare, so nobody's quite sure what's going on, but a couple weeks back about a dozen Pink Floyd bootlegs--unauthorized live recordings that had circulated in vinyl or CD formats back in the day--mysteriously showed up on Spotify. The concerts are from 1970-1971, with varying sound quality; they're audience recordings, and given their age and the technology at the time, are best suited for diehard fans, but some are decent enough. The speculation is that, owing to a copyright rule providing that live performance recordings lose their legal protection and move into the public domain after 50 years, the release is intended to establish the band's ongoing ownership of the works. This may also mean that the music will only be available for a limited time, long enough to establish the legal claim, so if you're interested and don't own these, check 'em out while you can.

I'm partial to this show from San Diego, recorded in October 1971; I've got the CD bootleg, and it's a pretty solid representation of the band's live sound shortly before the huge artistic leap of Meddle and, of course, their post-Dark Side of the Moon commercial heyday. The sound isn't bad at all; a bit muddy in the louder parts, but the vocals and instrumentation are pretty clear. You get a nicely jammed out "Fat Old Sun" from Atom Heart Mother, as well as that album's title track, appearing here without the orchestration of the studio version, giving it a much more organic vibe. "Embryo" is another highlight, a mainstay of their live sets around that time.

And here it is on Spotify, at least for now: