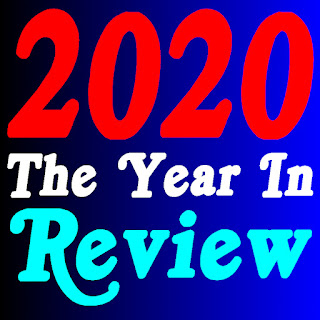 For some years now, my year-end mixes have followed a two-step process. At or around the end of the year, I'll burn myself a single-CD mix of my favorites songs from the past 12 months. (I posted an initial 2020 mix last December, and just shared my initial 2021 mix a few days ago.) And early the next year, I'll burn myself a "Deluxe Edition" 2-CD mix. This will pick up some tracks that missed the initial cut, or that I belatedly discovered (through music critics' and friends' year-end best-of lists). Also, as the single-disc version focuses largely on more upbeat tracks, I'll generally throw in some of the slower tunes when I have the luxury of 160 minutes rather than a mere 80.

Alas, as I grow largely disconnected from CD mixes, relying more on Spotify playlists, I've gotten a little lazy about circling back for part two. But, hot on the heels of landing on my first 2021 cut, I've belatedly finalized my extended 2020 mix. Which looks like this: 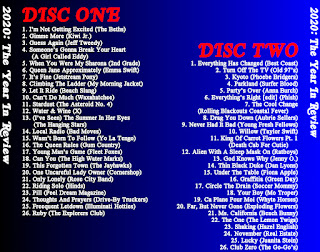 For those of you who are Spotify-enabled, here's the final playlist:

Meanwhile, you can see my year-end mixes dating back to 1966 collected on my home page.