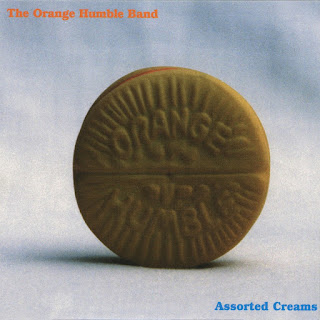 Look, this is simply a great album, resting comfortably at the midpoint between power pop and jangle pop, right in that Big Star/Teenage Fanclub sweet spot, plenty of bright, chiming mid-tempo tunefulness and a few killer stand-out tracks.

But it also raises the recurring question of whether we can divorce the art from the artist. Because Orange Humble Band, an indie supergroup of sorts, have Posies singer Ken Stringfellow on vocals--one of countless side projects to which he's contributed--and Stringfellow was the unfortunate subject of some highly disturbing sexual misconduct allegations this year. (The Posies disbanded in their wake, and Jody Stephens of Big Star parted ways with Stringfellow after a long partnership, among other fall-out.)

So take it for what you will.

But if you can, try to ignore that part and think of them as a band fronted by Australian indie denizen Darryl Mather, who'd previously been the original guitarist for 80s garage/punk band Lime Spiders and played in the more comparable jangle pop band The Someloves. (And if you like this one, do check out the collection of 80s singles by the Someloves, it's also terrific.) Plus you've got legendary producer Mitch Easter helping out on production, so you know what you're getting here.

And those stand-out tracks? "It Doesn't Matter" is hook-crazy jangle, and "Can't Get What You Want" is prime power pop. You'll love 'em, I promise. Then play the rest. Yep, pretty good throughout.

You can buy it on Bandcamp. Or don't, 'cuz hell with Stringfellow. But do give it a listen.

You can play a rip of the entire album ont YouTube. But here's "It Doesn't Matter":