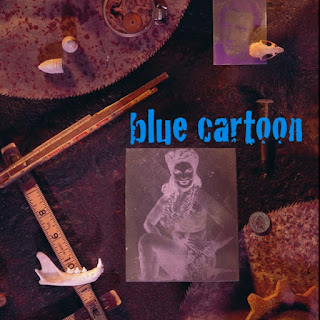 Blue Cartoon are one of those decent, occasionally great, power pop bands that have some fans in the power pop world but rarely get the attention they deserve in the broader indie rock universe. Their 1997 self-titled debut is much more on the "pop" than the "power" side of the equation, mid-tempo balladry that avoids the easy 3-chord hooks in favor of gentle but infectious melodies. More jangle than crunch, it's uniformly pleasant (not at all a bad thing), with some earworm choruses and embracing harmonies.

"Question Mark Smile," for one, channels Brian Wilson with a hint of psychedelic sitar, the best Posies track you've never heard; "Forgetting About You" reminds me of the like-minded Wondermints; "Coming Around" is a bit more upbeat, slipping into Matthew Sweet territory with a nice Byrdsy Rickenbacker break; and the rocking "Love Or Money" brings the Teenage Fanclub buzz.

Sadly, the band's catalog is out-of-print (you might be able to find a used copy of some of their CDs on Amazon), but surprisingly can be found on streaming media.