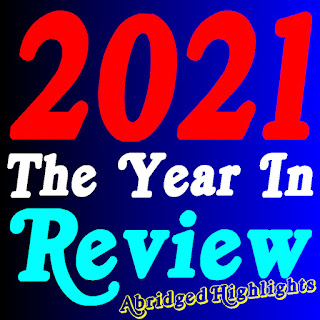 Yes, I got an itchy trigger finger and burned my annual year-end mix a few weeks early. Hopefully there won't be any great new releases in the last few weeks of the year. That said, I always circle back after year-end with a personal 2-CD mix that picks up the stuff that didn't make the cut, some last-minute entries, and music I only discover through others' year-end mixes. (You can see all my annual mixes from 1966 to the present on my home page.) 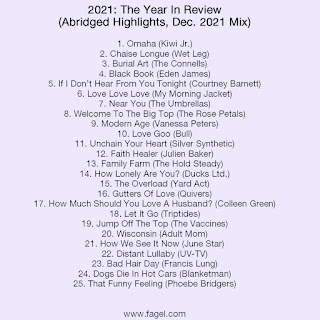 A few observations: There are a couple entries on the list that could arguably be considered "novelty songs." The song I found most addictive this year was Wet Leg's "Chaise Longue." It's a goofy little number from a band that hasn't even recorded an LP yet, deadpan vocals over a basic two-chord drum & bass hook; between the absurd lyrics ("Is your muffin buttered? Would you like us to assign someone to butter your muffin?") and the repeated "on the chaise longue" refrain, it's all rather silly. And I can't stop playing the damn thing. Great video as well:And then there's "The Overload" from Yard Act, another novelty-ish number from a new band without any album in the can, a cross between the British rap of the Streets and the anthemic chorus of "Tubthumping"; again, it's a guilty pleasure, but I can't stop playing it (and, again, great video!):But if I had to pick one song to call my favorite of 2021, it would be the Connells' "Burial Art." The band returned this year with a great album after a twenty-year break, and while it's all solid, this melancholy mid-tempo jangly-guitar tune is the one I have on auto-repeat. It's cryptic and open to interpretation, but that endearing chorus ("You like burial art? Me too. You've been falling apart? Me too."), sweetly sung in a rare vocal lead by guitarist/songwriter Mike Connell, just feels so right in these difficult times.

As is typical, my mix tends to cherry-pick the more upbeat tunes, as it's a disc I like to play in the car and on the go. Which doesn't mean there wasn't a lot of great but quieter music I've been listening to just as much; some of those tracks will end up on the extended cut. I did opt to end the mix on an unusually quiet note, but if there's one song that best captures 2021, it's Phoebe Bridgers' gorgeous cover of "That Funny Feeling," from Bo Burnham's Inside. Burnham's dark litany of current memes and events, a sort of Gen Z "We Didn't Start The Fire" or "It's The End Of The World As We Know It," gets hushed, loving treatment from Bridgers. It's pretty damn striking.

The longer running playlist for 2021, which will be used for the longer 2-CD extended mix, is here: