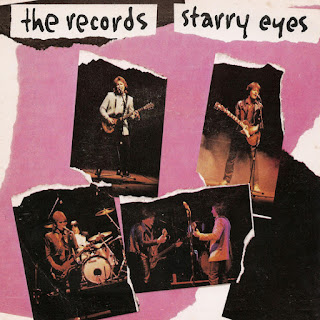 Definitely on the short-list of absolutely perfect power pop songs. Honestly, play that chorus for someone just one time, and I guarantee they'll be able to sing it from memory for life.

Released as a single in 1978 by British new wave/power pop band The Records, it's a killer pop tune with some delicious Byrdsy jangle. It didn't get a lot of traction in the US, and I think I first heard it at some point in my mid-80s college radio days. I rediscovered it on Rhino Records' 1993 multi-CD DIY compilation, which collected various assemblages of punk & new wave music. ("Starry Eyes" was on the amazing UK Pop 1978-79 disc, which also included the Undertones, Buzzcocks, XTC, Bram Tchaikovsky, Joe Jackson, etc... just wall to wall hooks.)

It's an incredibly fun and tuneful song that tracks the band's apparent dispute with their AWOL manager. "While you were on the beach were you dreaming all about your share?" Naturally, as a lawyer, I've gotta love the rare musical reference to lawsuits. "The boys have all been spoken to, the writ has hit the fan." And of course that astounding chorus: "I don't want to argue, I ain't gonna budge.Won't you take this number down, before you call up the judge? I don't want to argue, there's nothing to say. Get me out of your starry eyes and be on your way."

In 1992, around the same time as that DIY collection, snarky American alt.rockers Too Much Joy did a terrific re-write/cover, adapting the verses to track their own legal troubles (in their case, an obscenity arrest following a live tribute to shock-rappers Too Live Crew):