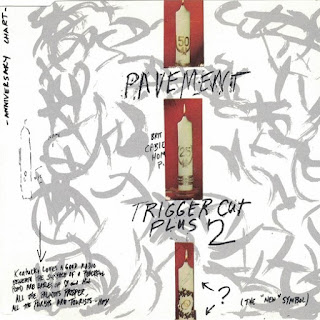 This one flows fairly logically from yesterday's "Catapult" post; if R.E.M. were the band that most impacted my musical life in the 80s, Pavement likewise carried me through the 90s. And their full-length debut, 1992's Slanted & Enchanted, remains one of my all-time faves.

The previously-referenced "Summer Babe" kicked off the album with a barrage of fuzz and excitement that merged melodic pop with the post-punk thunder of Sonic Youth and The Fall. But the second track completes the one-two punch, showing that even without the attention-grabbing sonics, the band could work magic, buoyed simply by weirdly melodic hooks and Malkmus's offbeat lyrical nuggets. The sound is clean but no less compelling than the 3 minutes that preceded it, giving plenty of breathing room to... whatever this was: "Lies and betrayals, fruit-covered nails, electricity. And lust." (And yeah, that's off the top of my head without turning to the Google... 95% of the album permanently etched into my brain.)

Throw in a call-and-response chorus, and a few la-la-las, to drive it all home, and the song's skewed yet infectious charm sets the pace for an entire decade ahead.

Still working its magic, just a few months back:
File Under: 1990s All My Favorite Songs Indie Rock Pavement