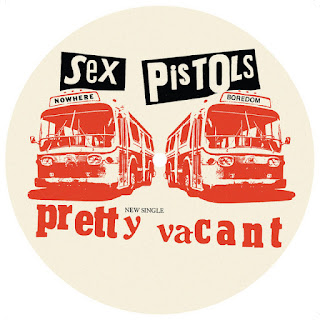 When punk rock first broke around '77, I was an 11-year-old kid in suburban Chicago, still in the thrall of the AM radio top station I'd discovered a couple years prior. Needless to say, punk did not penetrate my little bubble. By the end of the decade, I'd switched over to the FM dial and became fixated on classic rock and the broader palette of music available to me there; but even so, there was only so adventurous those Chicago radio stations got. I picked up the Clash's London Calling, of course, still my single favorite album of all time; a couple radio-friendly Ramones tunes like "I Wanna Be Sedated" and "Rock & Roll High School" broke through; over time I found my way to the Jam.

But I don't think I actually heard the Sex Pistols until I was about 15, in 1981, when Ralph Bakshi's animated film American Pop hit the local theater. It traced the history of 20th century music, through the eyes of several generations of an immigrant family. Frankly, it was a little dopey, but the music was good and the animation was cool and it played right into my musical obsessions; I loved it to death. The most striking scene came when the protagonist--walking the streets of 1970s NYC dealing drugs--enters a nightclub to peddle his wares, as stereotypical punk figures dance chaotically to "Pretty Vacant." I didn't know it was the Sex Pistols; I just knew the song jolted me awake, gave me the feeling that wow, that's what I want to listen to! I remember the film's climax, when the drug dealing kid finally decides to be a rock singer, following in the footsteps of his ancestors, and launches into Bob Seger's "Night Moves"--a great scene, but still, I really wanted him to play that other song, the song from the nightclub scene that totally cooked. That was rock music!

Unfortunately, I didn't know the name of the song or who it was by. It wasn't until about a year later, after I got my license and could drive into the cooler record shops near Northwestern University, the ones with much more interesting selections than the Musicland chain in my local mall, that I picked up a used copy of Never Mind The Bollocks. And there was that song! Sure, the entire album was great, immediately blowing through the band's mythology, just a bunch of terrific, catchy songs that just happened to come adorned with a million layers of Steve Jones' guitars and Johnny Rotten's defiant snarl. But when "Pretty Vacant" came on--hey, it's that song from American Pop! I'd finally tracked down this mystery tune from that wonderful scene that gave me such a thrill. And it was as thrilling as I'd remembered. Actually, more so; the version in the movie was different (the band wasn't even credited; for all I know it's not actually the Pistols), and the one coming out of my bedroom speakers was even better, more visceral and energetic and enticing.