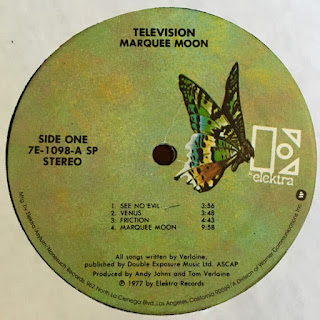 Damn, look at that line-up on side one of Television's Marquee Moon! If only they'd segued them together; then I could consider this a medley a la the Beatles and chalk up the whole thing as one fantastic song.

As it is, let's just go with the amazing album opener. That blazing dual-guitar sound that set the bar for so much indie rock that followed. Makes me just wanna stand midway between the speakers, crank 'em up, and let 'er loose. Richard Verlaine's not-exactly-radio-friendly vocals, and the band's CBGB's ethos, kept this firmly in the "punk rock" column and out of the public eye; but at heart it's shiny, exuberant power pop.

Hey, how about R.E.M. giving it a live shot?
File Under: 1970s All My Favorite Songs Punk R.E.M. Television