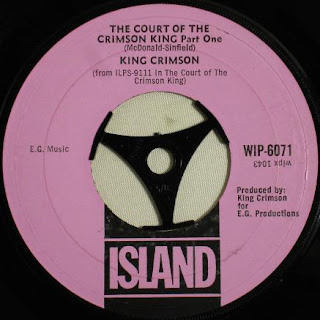 While my discovery of Peter Gabriel-era Genesis came first, it was taking a chance on that first King Crimson LP--back in those pre-internet days, based largely on that insane cover and a (not complimentary) review in the public library's beat up copy of the Rolling Stone Record Guide--that opened up my obligatory high school fixation with old-school progressive rock. Yes, by then I'd picked up Discipline, the reformed King Crimson's re-emergence from a lengthy dissolution, but I understood the new band (which I loved) had little in common musically with the original formation, presence of founder & guitarist Robert Fripp aside.

And man, I did love In The Court Of The Crimson King! I largely dropped my prog fixation once I got to college and moved on to indie rock, but my enthusiasm for this record never waned. Sure, the opening track, "21st Century Schizoid Man," seems to get most of the attention, a bracing sonic assault that's more metal than art rock; but I mostly preferred the quieter, more melodic stuff that followed. "Epitaph" was pretty dramatic, but the closing title track felt like the appropriate culmination of the record. It was sweeping, majestic, and beautiful, from Greg Lake (later of ELP)'s velvet croon, to the bold, room-filling mellotron, to the circus-like instrumental break a few minutes in.

As a young teen still wrapping my arms around classic rock history, sitting cross-legged on the bed with a pair of headphones, checking out the gatefold sleeve as the vinyl spun on my turntable, there was definitely that "holy shit!" sensation, that "I didn't know you could do this with rock music!" revelation. It still floors me.