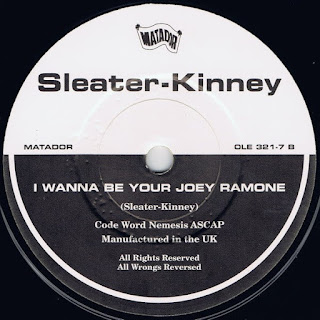 If you're here, you presumably share my unflagging conviction in the power of rock & roll to save your soul. Which makes us particularly susceptible to songs that share and promote this conviction. But it's a fine line: Sometimes a song adequately nails the transformative power of rock music (see, e.g., the Velvet Underground's "Rock & Roll"); but sometimes it comes across as cloying and shooting for the obvious (see, e.g., Bob Seger's "Old Time Rock & Roll"). Most are somewhere in between--i.e. The Kinks' "Juke Box Music" (a little too carefully designed for 70s AOR radio but, hey, it's still the Kinks); Joan Jett's "I Love Rock & Roll" (bubblegum pop, but Jett, as always, makes it kick ass).

But it's rare to find that ode to rock music that transcends the subject itself. Hence the glory of Sleater-Kinney's "I Wanna Be Your Joey Ramone," from 1996's Call The Doctor. It's first and foremost a visceral gut-punch, the call-and-response siren wails of Corin Tucker and Carrie Brownstein in that yeah-wow chorus saying more about pure, unadulterated musical joy than a dozen "I dig rock music!" proclamations. But it's all the more thrilling for so effectively driving home the obvious (but often ignored) reality that grrls, too, can nurse bedroom rock star dreams. Bonus points for foregoing the more obvious rock star poster-boys in favor of Joey (and, perhaps more problematically in hindsight but perfectly at the time, Sonic Youth's Thurston Moore).

Notably, Doctor was the last S-K album before powerhouse drummer Janet Weiss joined the band; and while the studio version is fine, one has to wonder how it could've been elevated even more with Weiss. So here's a live version with her at the kit (with Corin brilliantly subbing in Moore's ex Kim Gordon in the second chorus):
File Under: 1990s All My Favorite Songs Indie Rock Punk Sleater-Kinney Women Who Rock