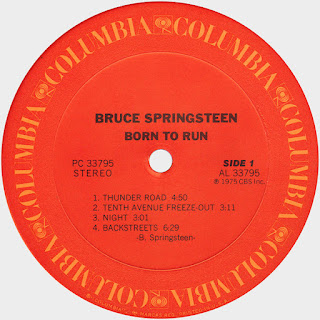 As I mentioned recently in sharing my reconfigured River album, my relationship with Bruce Springsteen's music has run hot and cold. I had great love for the Born to Run and Darkness albums when I discovered them as a kid, but 1984's culturally oversaturated Born In The USA kinda turned me off, and I pretty much ignored everything he released after that. But over the past decade, I've circled back and found much to love in his overstuffed post-70s catalog; and his opening of the concert vaults has given me endless opportunities to listen to some monumental performances (and replace my old bootlegs).

One thing that's remained constant, though, is my love for "Thunder Road," the opening track on 1975's epic Born To Run. Yeah, the title track got most the attention at the time, but this is the one I turn to more often. Musically, it perfectly captures the scope and majesty of the LP, from the opening piano and harmonica conjuring the lonesome, longing feel of a New Jersey sundown, to the Phil Spectorized bar band warmth that finally kicks in a few minutes in, and of course that moment that absolutely slays me--the drum breakdown at about 3:45 into the song, the wailing sax and killer riff kicking in and ushering in the song's coda... damn.

But of course it's the lyrics that are burned most indelibly into my brain. I mean, is there a more perfect opening line? "The screen door slams, Mary's dress sways. Like a vision she dances across the porch as the radio plays Roy Orbison singing for the lonely--hey, that's me, and I want you only." But of course that's just prelude to my favorite couplet in the dense Springsteen songbook: "Show a little faith, there's magic in the night. You ain't a beauty, but hey you're alright." Ok, maybe not the compliment his young woman is hoping for, but if she isn't taken in my that bit about magic in the night, what's the point?

The rest of the song is simply littered with wonderful prose. One more fave before we pack it in: "Roll down the window and let the wind blow back your hair, the night's busted open these two lanes will take us anywhere. We've got one last chance to make it real, to trade in these wings on some wheels."