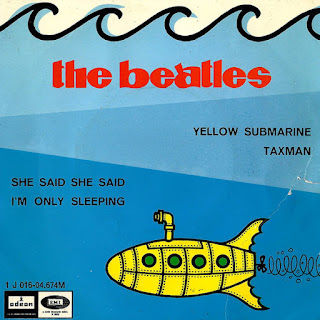 Ah, yes, our brief Beatles break comes to an end with the second contribution from Revolver (third if you count "Rain") (which I do, because adding the "Paperback Writer"/"Rain" single would've made the album absolutely perfect). "She Said She Said" is part of that batch of buzzy Lennon-helmed psychedelia from '66 ("Rain," "Tomorrow Never Knows," "And Your Bird Can Sing") which form a neat bridge between the more traditional guitar-driven rock of the band's early years and the artistically ambitious "Strawberry Fields Forever," recorded mere months later.

The song is apparently a reference to actor Peter Fonda's proclamation that "I know what it's like to be dead" while he was tripping balls with the band, with the genders swapped for lyrical purposes. Roots aside, the song is a pretty damn cool encapsulation of UK pop's pivot to psychedelia, but it's still more rock than flower power--that snaky, chiming guitar riff; the just slightly discordant verses; some slippery fills from Ringo; that uptick to double-time at the end.