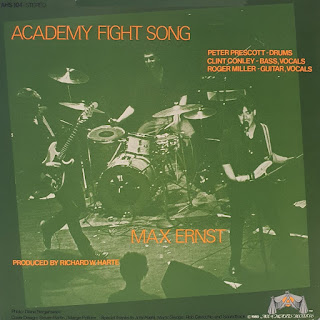 One of a handful of songs I came to appreciate after hearing a bang-up R.E.M. cover. Boston's Mission of Burma were one of those bands everyone at the college radio station seemed to revere, a post-punk band whose boisterous, challenging music could be seen as an influence on many of the mid-80s college radio mainstays. But I generally found them more interesting in concept than enjoyable to listen to, filing them alongside other cool & influential yet a little outside my comfort zone acts (Pere Ubu, PIL, Swell Maps, Birthday Party, etc.). Still, they had a few tracks that I came to love over the years, chief among them the relatively straightforward "Academy Fight Song," a killer 1981 single.

It's raw and aggressive, with a propulsive rhythm section that feels designed to soundtrack an insurrection, but has enough of a pop hook to draw you in. It's the lyrics that really win me over, an oddly specific anthem of military school rebellion, though for me it more broadly captures that sense of outsiders-fighting-conformity depicted in so many 80s teen flicks I grew up with. "The halls smell like piss; the rooms are underlit. Still it must be nice, you're such a perfect fit. What's that I hear? The sound of marching feet. It has a strange allure..."

Live in '83:How about a bunch of kids at a School of Rock performing it? Yes, there's hope for the future!And that R.E.M. cover:
File Under: 1980s All My Favorite Songs Indie Rock Mission Of Burma Punk R.E.M.