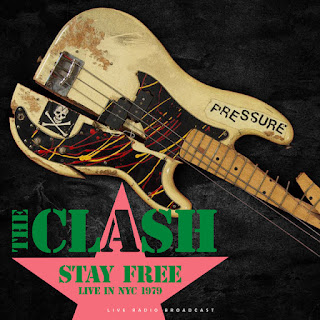 The Clash's 1978 Give 'Em Enough Rope isn't their most consistent album, and has a mixed critical legacy, but it gave us a couple of their finest moments. Mick Jones takes lead on the poignant, personal "Stay Free," which may be autobiographical or just some fine Ray Davies-quality storytelling. It's a tale of two childhood buddies and trouble-makers ("We met when we were in school. Never took no shit from no one; we weren't fools"). One ends up a rock star; one ends up in prison. And when he's released? "We're gonna hit the town, we'll burn it fucking down!" But it ends a little more sweetly, Mick exhorting his friend from the stage: "Have a drink on me. But go easy, step lightly. Stay free."

Do I tear up a bit at that closing line? Yes, yes I do.

Bonus points for that bouncy bassline, and particularly the surprising bit at the very end when everything drops out but for a few bars of acoustic guitar. It's just a brief fade-out, yet the sort of attention to detail that showed the Clash weren't just another punk band, but purveyors of studio-polished rock & roll majesty, as would be confirmed on the next album.