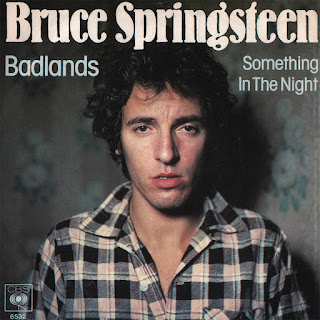 Among the traits shared by Springsteen's two finest albums is kicking off with a definitive opening track. "Thunder Road" set the pace for 1975's Born To Run with a grandiose road song, sweeping and epic like much of the album; while "Badlands" made it clear from the opening drums that 1978's Darkness On The Edge Of Town would offer some more direct, concise rock & roll. "Badlands" is certainly one of his most immediate tunes, with an atypically basic three-chord progression out of the Kinks songbook, a viscerally exciting chorus, and a blistering guitar break. And it opens with one of the clearest statements of purpose one could conjure: "Lights out tonight. Trouble in the heartland." But the real lyrical magic comes about midway through, one of those incisive Springsteenisms you can recite from memory 45 years later.

Live in 1979:
File Under: 1970s All My Favorite Songs Bruce Springsteen Classic Rock