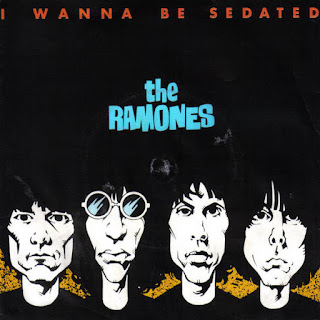 By the Ramones' fourth album, 1978's Road to Ruin, they had sanded off some of their rougher edges (and in the process lost a bit of the excitement of the first few albums). Still, "I Wanna Be Sedated" is arguably the perfect blueprint for pop-punk (ok, setting aside what the Buzzcocks & Undertones were doing on the other side of the Atlantic).

Sure, it's pretty much the same rapid-fire three-chord blast of bratty silliness they'd been working since "Blitzkrieg Bop," but with a coating of shellac it becomes a radio-friendly pop tune with just a whiff of danger. It was probably the only thing from the Ramones that penetrated the sterile bubble of the midwestern classic rock stations I was soaking up in middle school, but it was enough to make me perk up my ears and think, yeah, more music need to sound like THIS.

Plus, it was simple enough for the limited musicianship of my high school band to handle when we performed it, poorly, at the school's annual talent [sic] show.

And live...
File Under: 1970s All My Favorite Songs New Wave Punk Ramones