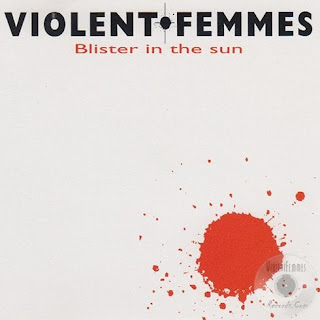 Spring of 1983, nearing the end of my junior year of high school, and I was hanging out with my buddy David listening to records at his house in Highland Park. We took a spin through The Name Of This Band Is Talking Heads, the Heads' outstanding double-live LP (which to this day I prefer to the better-known Stop Making Sense). And then he pulled out some new vinyl he'd recently picked up, the debut from the Violent Femmes (hailing from nearby Milwaukee).

And in the moment it seemed like the coolest album ever. Some resemblance to the punk & indie rock I'd started exploring (though my exposure to that remained pretty limited until I got to college the following year); but stripped down and acoustic, like folk music played by snotty, stoned teens.

And of course the lead-off track gets your attention instantly, that simple 3-note riff that I played incessantly on my acoustic guitar when I got home, the lyrics that felt both sophomoric and emphatic--if you didn't spend part of high school walking the halls while singing "When I'm out walking I strut my stuff, and I'm so strung out" under your breath, I didn't want to know you.

I ran out soon thereafter and bought the cassette at the local mall.

For awhile, that tape felt like a great little secret. Sadly, at some point while I was in college, the song found a broader frat-boy audience; I remember hearing it playing at a party, idiots guzzling warm Rolling Rock out of red Solo cups belting along, and it totally turned me off. I still liked the band, and bought some of their subsequent albums, but it took a few years and some emotional distance before I could enjoy the song again.