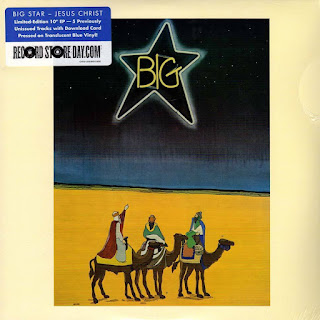 Ah, yes, it's that time of year again. The inescapable Christmas music everywhere you go (went out for lunch earlier this week, and Tom Petty's "Christmas All Over Again" was being cranked over the loudspeakers at ungodly levels, which at least is better than, say, "Winter Wonderland"). The endless debates over whether Paul McCartney's "Wonderful Christmastime" is truly terrible or a guilty pleasure. (Sorry, truly terrible.) And it's particularly tough when you aren't someone who celebrates Christmas, and you just have to grin and bear it.

Thank God for Big Star, who recorded one of the few Christmas songs that's enjoyable year-round. (Or at least Christmas-adjacent; the song doesn't reference Christmas, but the refrain "Jesus Christ was born today" makes it a Christmas song in the most literal sense.) It's a prime piece of Alex Chilton jangly pop, recorded in 1974 but finally released a few years later on Big Star's Third. Some reissues have stripped it of the odd circus organ intro; but that intro was part of the version I got used to on my copy of Third, and while it's a discordant way to kick off the track, the song feels a little naked without it.

Big Star's acoustic demo:R.E.M.'s Mike Mills singing it as part of a tribute to the Third LP:There are a lot of decent cover versions out there; Teenage Fanclub have a sweetly reverent take:Kristin Hersh of Throwing Muses does a nice job with it as well, church bells and all:
File Under: 1970s All My Favorite Songs Big Star Jangle Pop Power Pop R.E.M. Teenage Fanclub Throwing Muses