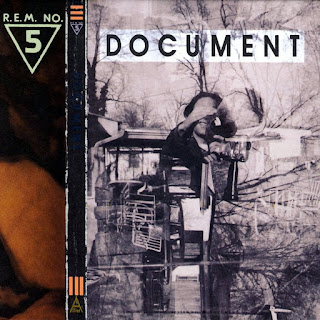 R.E.M.'s Document brought their initial indie days on the IRS label to a close in 1987. They had been THE life-changing band for me throughout my college years, and this was sort of a bittersweet capstone. (Which isn't to say I didn't love and treasure R.E.M. right up through the bitter end, but by that point they were no longer "my" little band from the college radio station.) Document continued their move away from the gentle, jangly guitars of their first few records into a more muscular guitar rock. After several records that were perfect from end to end, there are a couple duller spots on the back end, but still plenty of highlights that got my attention from the get-go. There was the rollicking wordplay of "It's The End of The World," the ironic mainstream penetration of "The One I Love," the conversion of Wire's sludgy "Strange" into a boisterous pop song, and the encapsulation of the reactionary political moment in "Exhuming McCarthy."

But the tune that's really become the centerpiece for me, and which would still be a mandatory inclusion on every mixtape (were I still making mixtapes), is "Disturbance At The Heron House." It's got a killer guitar riff, arguably Peter Buck's most memorable; and walks that fine line between humble jangle and booming arena-ready anthem. Bassist Mike Mills provides some great harmonies (that Stipe & Mills offsetting "head for home" near the song's end is one of those truly magical musical moments that seems both casually tossed off and perfectly planned). And Stipe's cryptic lyrics seem to capture the Reagan-era malaise less directly but no less effectively than "Exhuming." (There's a cool explanation of the song's meaning here.)

A few years later, Uncle Tupelo seemed to repurpose the riff for "Grindstone" (on a 1992 album produced by Buck), and I've always enjoyed the linkage between the two.