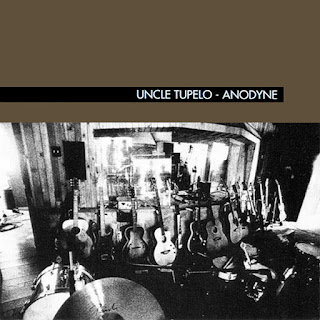 As much as I enjoy a lot of Son Volt's music, I'm definitely a Team Wilco kinda guy; so, naturally, while I think the Jay Farrar tunes which dominated Uncle Tupelo are often ridiculously great, I always had a soft spot for Jay Tweedy's contributions. And while Tweedy was a less developed songwriter when the band started out, by the time of 1993's Anodyne, their final album (setting aside my own imaginary follow-up), he'd really come into his own.

That album's "New Madrid" makes it pretty evident that Tweedy couldn't be relegated to second fiddle. It's a sweet little country-rock track, twangy banjo and catchy hook, shedding some of Tupelo's emotionally stark tendencies for a surprisingly sunny sing-along melody (albeit with some dark undertones. Farrar's unique vocal tone, here backing Tweedy, helps immensely (a shame they didn't duet more frequently). The lyrics are both cryptic and specific, images of both an earthquake-riddled midwestern region and a lost love. "All my daydreams are disasters, she's the one I think I love" stands as one terrific opening line, no?

Not surprisingly, for a few years this tune stood as the monument to Tweedy's past, remaining part of the Wilco live setlist as he took the band well beyond their Americana roots. It was ultimately dropped, these days showing up on rare occasions as just another cover song dusted off as a crowd-pleaser.