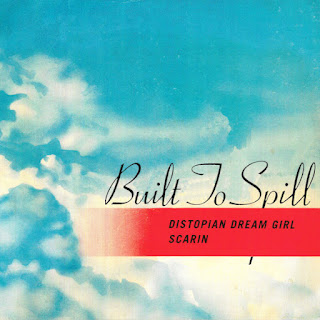 For a couple years in the early/mid-90s, I was living in the Noe Valley neighborhood of San Francisco (before my wife and I embarked for the suburbs and parenthood). I had a brief commute on the BART to my downtown law office. The front bay window of the drafty, ancient Victorian we were renting overlooked Dolores Street, a hilly avenue lined with palm trees. On weekends, when I wasn't working (this was in the days before telework, when weekend work still meant coming in to the office), I'd hang out on 24th Street, buying used CDs at the Aquarius and Streetlight shops (long since shuttered).

There are a few artists permanently associated with that part of my life. Pavement and Yo La Tengo, of course. Luna, Liz Phair, Bettie Serveert, Guided by Voices.

But one song in particular brings me back to my Noe Valley days. Built To Spill's 1994 sophomore album, There's Nothing Wrong With Love, wasn't something I played often; it was their more expansive subsequent albums (and some dynamite live shows) that really hooked me. But the single "Distopian Dream Girl"? That's another story, something I threw onto all my mixtapes and cranked up whenever I got in the car.

It's got this fantastic, kinda messy guitar hook, as much capturing that slack indie rock sound as Pavement's work, frontman Doug Martsch exercising his unique brand of deceptive ease that feels like it could go totally off the rails at any moment; and some indelible lyrical lines that still unexpectedly play uninvited in my head from time to time. "My stepfather looks just like David Bowie, but he hates David Bowie. I think Bowie's cool; I think Lodger rules, my stepdad's a fool." Great stuff.

And then there's the chorus, which for whatever reason always unnerves me a bit. "If it came down to your life or mine, I would do the stupid thing. And let you keep on living."