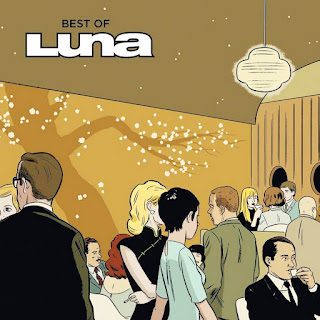 I spend a lot of time kvelling about Pavement and Yo La Tengo and Guided By Voices... But Luna were just as big a part of my 90s listening (and life) experience, albeit in a more understated, easy-to-take-for-granted way. I loved their 1992 debut, especially some of the upbeat rocking stuff. But the follow-up, 1994's Bewitched, established the template that would last throughout the band's run, a mellower, more laid-back vibe that blended the moody psyche-tinged shoegaze sounds of frontman Dean Wareham's earlier band Galaxie 500 with a brighter pop sheen. And the song that captured the vibe most effectively was "California (All The Way." It may not be the band's best or most distinctive song, but it really sets the tone for their work (and, with its eminently approachable mid-tempo amiability, livelied up with a rousing guitar break, made for the perfect inclusion on all my 90s mixtapes).

The initial moments are truly captivating, a gentle dual-guitar strum with a nice little kick from drummer Stan Demeski (ex-Feelies), leading into a pure Wareham opening salvo: "Well she followed him from Phoenix out to Californ', and then she passed out on the bed. And all the little things he never even asked her for, she simply smiled and shook her head." That's always stuck with me for some inexplicable reason.

Live on tv in '94:...and the later incarnation of the band, reformed for a performance last year:
File Under: 1990s All My Favorite Songs Feelies Galaxie 500 Indie Rock Luna