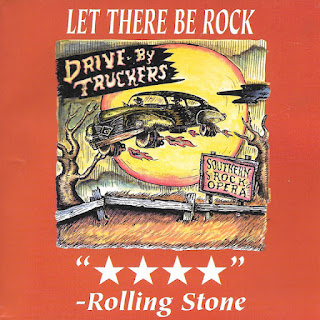 I wrote previously about how hard it is to write a song about loving rock music without sounding cheesy. For every Sleater-Kinney singing about wanting to be your Joey Ramone, you're likely to find a fistful of Peter, Paul & Marys assuring us, somewhat unconvincingly, that they dig rock & roll music. But surprising no one, the Drive-By Truckers delivered one of the all-time great odes to growing up on rock music.

Patterson Hood takes a pass on the more universal approach and sticks with the personal, a narrated tale about getting wasted and going to hard rock shows in his youth. "Dropped acid, Blue Oyster Cult concert, 14-years-old, and I thought them lasers were a spider chasing me." Indeed! The Truckers pay particular tribute to the Southern bands whose mantle they'd assume (and, for me, immeasurably surpass), noting with regret that, alas, the one band they missed were Lynyrd Skynyrd. "Skynyrd was set to play Huntsville, Alabama, in the spring of '77, I had a ticket but it got canceled... and the rest, as they say, is history."

They crescendo with one of the ultimate triumphs in unironic, glorious, fist-pumping, lighter-hoisting anthems: "I never saw Lynyrd Skynyrd, but I sure saw AC/DC, with Bon Scott singing, 'Let There Be Rock!'" as Hood and Mike Cooley twist out an Allman Brothers-styled twin guitar jam.

Like a few songs on the list, it's an epic perfectly designed for a live performance. The studio track, off 2001's outstanding Southern Rock Opera, is fantastic on its own merits, a hard-charging four-chord riff carrying plenty of heft behind Hood's storytelling; but it really needs to be seen live, with all the accoutrements of the concert experience they celebrate within the song, to be truly felt within the soul.