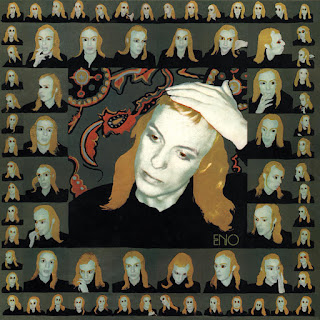 As much as I love Brian Eno's quieter, ambient work (particularly as found on 1975's Another Green World and parts of 1977's Before And After Science), "Burning Airlines Give You So Much More" is one of those songs that's always made me wish he'd persevered longer as a quirky pop/rock artist before delving into primarily instrumental music and production work. Like most of 1974's joyfully twisted Taking Tiger Mountain (By Strategy), "Burning Airlines" is a bit skewed, drawing from the art/glam mélange of the Roxy Music he left behind but adding a distinctive lyrical and musical sensibility.

Lyrically, it's a neat slice of storytelling, as sweet Regina heads to China (perhaps to do a bit of spying, "with micro-cameras hidden in her hair"), carried along by Eno's underrated, whimsical vocal charm. But it's the music that stands out, a jagged, chaotic keyboard riff paired with thes weirdly off-beat, crunchy guitar jabs, a pop song from a Bizarro universe that doesn't follow the usual three-chord rules.

Latching onto the pop heart of the song, power pop wunderkind Jason Falkner does a great job with his version.
File Under: 1970s All My Favorite Songs Brian Eno Indie Rock