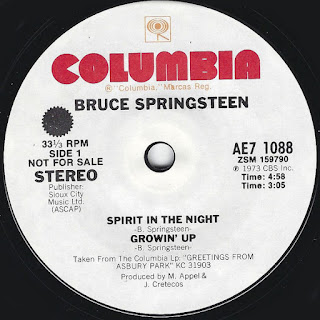 It may have taken until his third album for Springsteen to truly hit his stride musically & commercially; but his 1973 debut, Greetings From Asbury Park, was packed with tremendous, enduring compositions, arguably diminished only by his presentation as a latter-day early-60s Dylan rather than as a full-on rock and roller. (Ah, to have a re-recorded version of that album with the E Street Band, only some of whom appeared on a few songs on the record... though a 2009 performance of the complete album, available from nugs.net (the last show with Clarence Clemons on sax before his 2011 passing), does the trick.)

The greatest, most emotionally thrilling of those early tracks--rising up even among Bruce standards like "Blinded By The Light," "Spirit In The Night," and "It's Hard To Be A Saint In The City"--is "Growin' Up," taking the recurring rock motif of youthful rebellion and giving it an infusion of Springsteen's unique lyrical gifts.

"I took month-long vacations in the stratosphere, and you know it's really hard to hold your breath. I swear I lost everything I ever loved or feared, I was the cosmic kid in full costume dress." Yeah, works for me. Hell, even the seemingly basic "When they said sit down, I stood up" takes on mythological significance in Springsteen's telling.

And while I have limited patience for some of the Boss' lengthy storytelling exercises in concert, his mid-song "Growin' Up" narratives, captured on various bootlegs (and the Live 1975-1985 box set) can be pretty damn captivating. In one telling, he and Clarence encounter a Martian stranded in the wilds of Jersey, and in return for getting his space ship out of the mud, he's granted 3 wishes. Bruce and Clarence ask to be movie stars... and the alien says, sorry, you ain't got the looks... but would you settle for rock & roll? Damn, that kills me, I could listen to it over and over.

Live in 1978, mid-song storytelling and all:And one day after talking about Superchunk--I love the cover version from Mac McCaughan's Portastatic side-project, giving the tune a more rocking but still faithful sheen.
File Under: 1970s All My Favorite Songs Bruce Springsteen Classic Rock Superchunk