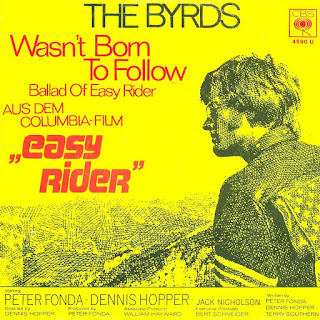 Another track from one of my favorite records, the Byrds' 1968 Notorious Byrd Brothers; and another instance of the Byrds providing the definitive take of a song written by someone else. In this case, it's a Carole King/Gerry Goffin tune, which the Byrds had the luxury of recording first (King recorded her own slower, piano-based version with her short-lived band The City that same year). It's a beautiful tune, delightfully melodic, but given a jangly, pastoral vibe by McGuinn et al. (with that noisy, flanged-guitar bit in the center that, for better or worse, gives it a trippy psychedelic edge). The hippie-era, freedom-celebrating lyrics avoid triteness through their lofty imagery ("And if you think I'm ready, you may lead me to the chasm. Where the rivers of our vision flow into one another").

The tune gains a bit of heft from its appearance on the Easy Rider soundtrack (alongside another Byrds classic we'll be getting to one of these days), and the image of Fonda & Hopper crossing America on their choppers is hard to divorce from the journey depicted in the song's lyrics. But even without that association, it's a distinctly late 60s song, idealistic and free-spirited, and a wonderful centerpiece for the Notorious LP.

Here it is set to some Easy Rider footage: