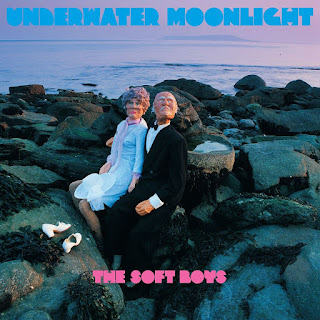 Robyn Hitchcock and the Soft Boys update Syd Barrett-era Floyd psyche-pop and Byrdsy jangle, opening the door to R.E.M. and the mad rush of 80s college radio jangly guitar bands. It's a delightful little pop gem, off 1980's wonderful Underwater Moonlight, another entry on the list of songs that would have dominated AM Top 40 Radio in an alternative universe where people were rational.

Hitchcock's lyrical absurdism is on full display, though the rush of silly rhymes seems almost like an homage to early Asbury Park-era Springsteen. "Bucky the Pig is out on a limb, he's looking for someone to investigate him. I don't know why he never gets anywhere with you." [Frankly, I've never figured out the name of that damn pig; every version of the song sounds a little different. Lucky? Mucky? Plucky?]

Does the song mean anything? Doesn't really matter, you're still stuck singing along. And I've always been totally won over by the bittersweet sunshine behind the couplet: "In this horrible age of abuse and decay, it's good to know that somebody's looking ok." Always brings a smile to my face!