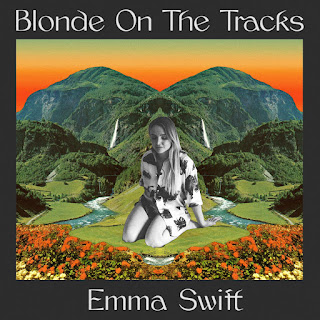 New one out today, and it's lovely. Australian (but currently Nashville-based) songwriter Emma Swift adds her beautiful vocals to a swath of Dylan tracks, and it's a modest yet gorgeous collection.

As noted before, I'm a lukewarm Dylan fan, rarely listening to much beyond his mid/late 60s classics, preferring to hear his lyrics filtered through other artists, and Swift fits the bill perfectly, delivering quietly ingratiating versions that range from folk-tinged Americana to misty dream pop. While a few are old favorites -- the album opens up with a Byrdsy "Queen Jane Approximately," one of my favorite Dylan tracks -- she weaves in a few less well-worn tunes, including a dreamily understated, almost Mazzy Star-esque take on "I Contain Multitudes," off Dylan's unexpected 2020 pandemic release. (Those two songs were released as early singles; I'm still working my way through the other 6 tracks, but on first preview they're all pretty damn sweet; album closer "You're a Big Girl Now" is positively captivating.)

I don't know a lot about Swift as an artist -- I stumbled across her while keeping tabs on one of my personal musical heroes, Robyn Hitchcock, Swift's partner (who lends some guitars here) -- but after hearing her magical pipes affixed to some (mostly) familiar tunes, it definitely makes me want to scurry off and check out her own originals as well.

Swift is no fan of the artist-unfriendly Spotify, so the album doesn't stream; but you can check it out and buy a copy over at Bandcamp. You won't be disappointed.

UPDATE: As of December 2020, this is now streaming. If you haven't picked it up already, check it out:
File Under: 2020s Americana Bob Dylan Dream Pop Emma Swift Folk Singer-Songwriter Women Who Rock