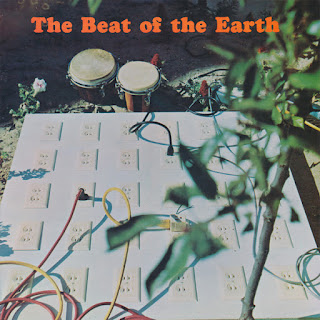 Time to once again indulge my love of obscure and bizarre albums of the psychedelic '60s. And you can't get much more obscure or bizarre than this.

The Beat of the Earth was a one-off recording by a Southern California band fronted by a guy named Phil Pearlman. It was limited to a few copies, but found some admirers and was ultimately reissued on CD decades later. The album is just two songs (unclear if they were untitled, or titled "This Is An Artistic Statement 1 & 2"), each the length of the album side. The whole package is basically an extended instrumental improvisation with some spoken word "poetry" or meanderings, with psychedelic guitar jams and creepy droning organs.

Think the instrumental section of the Doors' "The End" stretched out to 40 minutes, mashed up with the Velvet Underground's "Sister Ray" (with shades of the Grateful Dead's notorious live Acid Tests), and that's pretty much it. You can enjoy it as either the culmination of the West Coast psychedelic sound taken to its illogical conclusion; or as an imaginary soundtrack for a terrible low-budget exploitation film about drug-addled hippies peddled by terrified old men. Either way, it's a brain-rattling 42 minutes.

Pearlman was later responsible for a wholly different but no less obscure album by a band called Relatively Clean Rivers, which adopted the Dead's more pastoral post-American Beauty vibe rather than its psychedelic side (and is actually a surprisingly great album of laid-back Americana, though it's impossible to find).

Here's a rip of the full LP: