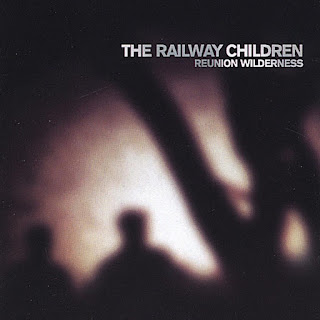 ...and while UK band The Railway Children had much in common with the American jangle-pop bands of the era, they also had a British melancholy to their sound, shades of the Smiths as well as legendary Australian band the Go-Betweens. The original line up released three full-length LPs, as well as a number of EPs and singles (a later hits collection pulled together the singles and b-sides). All are pretty much equally worthy of attention and, alas, all are long out of print (though most of the catalog does stream on Spotify).

I'm partial to their 1987 debut, which pretty evenly balances the indie pop jangle with the more downbeat moods. Opener "Another Town" exemplifies that line-walking, a catchy, insistent tune but with hints of darkness around the edges. Singer-songwriter-guitarist Gary Newby has an engaging vocal style, fitting in nicely alongside the British crooners of the New Wave era, adding heft to the light, dreamy, guitar-driven jangle. "Railroad Side" is lovely, "Brighter" has a buoyant effervescence, "Listen On" adds a little more energy and buzz, "Gentle Sound" gallops along, and "History Burns" is a terrific little pop number.

After a few years the band broke up, with Newby releasing a few more albums under the Railway Children moniker, though they've reunited for live shows in recent years.

Here's an audio rip of "History Burns":
...and the video for "Brighter":
Here's "Another Town" performed live at a reunion gig: