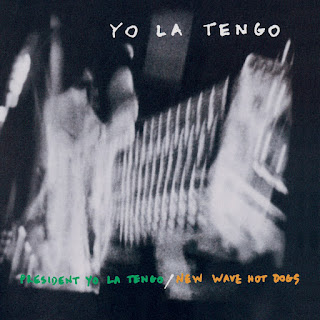 It's pretty easy to pinpoint the precise moment when Yo La Tengo pivoted from just another half-way great college radio band to one of my favorite acts of all time.

Circa '89, I was living on the South Side of Chicago, attending law school. I'd periodically treat myself to the long drive north to Evanston, near Northwestern, and stop by all the indie record stores where I'd spent much of my time (and money) during high school and college. On one trip, I spotted the new President Yo La Tengo album. At that point, I hadn't really been keeping on the band. Their first two albums came out while I was still at the college radio station, but their first hadn't really moved me, and while the second (1987's New Wave Hot Dogs) was a huge step forward--songs like "A Shy Dog" and "3 Blocks From Grooves Street" were pretty great--I'd lost track of them since graduating.

But since the President CD came paired with New Wave, it was too good a deal to pass up. And this time they hooked me from the record's opening notes. "Barnaby, Hardly Working" sounded little like their prior releases. It's a droning feedback loop, with a jangly three-chord guitar figure floating on top, Ira Kaplan narrating more than singing while propelled by Georgia Hubley's crisp snare. Over the course of the song, layers flow in and out--a buzzsaw guitar slide up the string, some stray keyboards, the sound of distant bells--making for a hypnotic piece far more concerned with texture and atmospherics than on traditional song structure. (Though like their best work, there's still a wonderfully catchy tune at the heart of all the ambience.)

The song had the benefit of being the perfect accompaniment for my drive back down Lake Shore Drive, entrancing and cinematic. And it totally built the blueprint for their series of spectacular 1990s releases, records as focused on weaving sonic tapestries as on crafting punchy indie rock songs.

The acoustic version, freed of the song's central drone:Live, just a couple weeks ago:
File Under: 1980s All My Favorite Songs Indie Rock Yo La Tengo