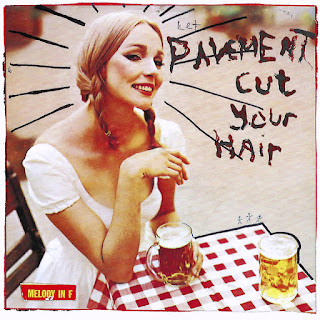 Pavement's 1992 debut Slanted And Enchanted was such a life-changer, the wait for a follow-up couldn't help but be filled with some trepidation. Sure, the 4-song EP that followed in late 1992 was all-killer no-filler, but, still, just four songs. And then... nothing. They fired their drummer, brought in a new guy, but 1993 was radio silence.

Were they gonna be a one-and-done band? Or squander the goodwill from their stellar debut with a delayed sophomore effort that would fall woefully short? (See, e.g., the Stone Roses.)

Finally, in early 1994--nearly two years after Slanted--the wait was over. And with the opening notes of Crooked Rain, Crooked Rain's "Silence Kid," it was pretty clear that Pavement were no one-trick pony. But it was a few songs later, with "Cut Your Hair," that they totally locked in their role at the vanguard of 90s indie rock. It was a fun, poppy little number that seemed designed to fight its way onto post-Nirvana alt.rock FM radio and late-night MTV, packed with crowd-pleasing whoo-hoo-hoo-hoos, yet without sacrificing any of their hipster credibility, a sell-out track that was totally self-aware of its intent and deftly walking the line between indie rock purity and courting broader accessibility. "Songs mean a lot when songs are bought. And so are you."