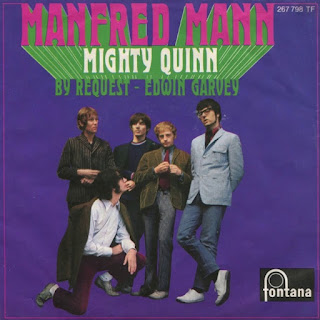 Here's another instance where, at least for me, the cover far outshines the Bob Dylan original. "Mighty Quinn" (aka "Quinn The Eskimo) was something of a trifle from the legendary 1967 "basement tapes" recording sessions, Dylan rattling off silly yet memorable nursery rhymes with the backing of the Band. Those sessions quietly circulated among various artists, and British Invasion act Manfred Mann recorded it and made it into a 1968 hit single.

The original Dylan/Band version was inexplicably omitted from the official Basement Tapes release in 1975, though they showed up later on various Dylan collections (and a live version was included on Dylan's somewhat confounding 1970 hodge-podge Self Portrait). The original Dylan recording is fine, if, again, a bit lightweight, a deliberately-paced folk-rock tune. But Manfred Mann capitalized on the song's whimsical nature and turned it into pure bubblegum pop, a jolly sing-along number with a nifty flute line. (By this point, the Manfreds were in phase two of their varied, lengthy run, their original British Invasion-era vocalist having left and been replaced by Mike d'Abo as the band moved from their R&B roots to a more psychedelic-pop sound.) Not surprisingly, Dylan's later live version incorporated Manfred Mann's more upbeat, poppy flourishes.

Somehow, Dylan's meandering lyrical aburdity worked well as perky pop. Lines like "I like to go just like the rest, I like my sugar sweet. But jumping queues and makin' haste just ain't my cup of meat" may not make a lick of sense, but in Manfred Mann's interpretation were surprisingly hummable. And the chorus of "Come all without, come all within, you'll not see nothin' like the Mighty Quinn" was a perfectly catchy snippet as first sung by Dylan, but slathered with cheery pop (and a wicked-fun drum performance by Mann's namesake drummer) made it the sort of line I could hear on the radio as a little kid and never, ever get out of my head again.

The original Basement Tapes recording:The song became an encore staple for the Grateful Dead, while Phish did them one better by giving it a rocking, anthemic groove.
File Under: 1960s All My Favorite Songs Band Bob Dylan Classic Rock Manfred Mann Phish