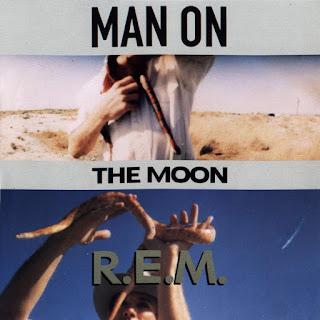 So, I'm thinking it might be time to wind this endeavor down. I was driving most of the traffic to this site through Twitter posts, and would usually get about 200 hits a day here, which was fine. But since Musk started driving Twitter into the ground, in part by funneling views away from accounts that don't want to pony up a monthly fee, my hits are way down--maybe 30-40 people are seeing each of these posts. And, hey, if you're here, I love you. Thanks for dropping by! But maybe this is a sign that it's time to move on.

Plus I'm back to teaching law school and kinda busy.

So who knows; if I'm bored, this is a nice enough way to kill 30 minutes each day, even if just for my own amusement. We'll see.

Anyway, yep, more R.E.M. And as repeatedly noted (since the very first post on this site), I'm largely an IRS-era guy. I love plenty of the band's later work, and listened right up to the bitter end, but it's those early albums with which I feel the greatest emotional kinship. Still, there were songs from the Warner Brothers years that are way up there--particularly this gem from 1992's Automatic For The People. That seems to be the album that really won over the masses, and I won't begrudge them that. Sometimes (occasionally? rarely?) the masses get one right. And there's no denying this song, from the captivating, at times poignant lyrics that serve as both a specific ode to late comedian Andy Kaufman and a more cryptic take on conspiracy theories; to the way the gentle, beautifully sung verses, with the little "yeah yeahs" and Stipe's goof on Kaufman goofing on Elvis, break into a booming, anthemic sing-along chorus.

Plus it just sounds fantastic. For all my love of the rawer, jangly early stuff, the stunning production here is quite something.

Arguably one of the top 5 mixtape essentials of the 90s.