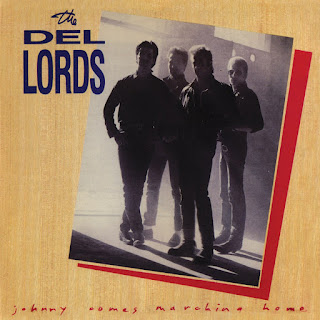 Their second album, 1986's Johnny Comes Marching Home, is my personal fave, a smile-inducing distillation of their sound. A bit of twang and rockabilly, and a whole lotta stomp, with a fistful of sing-along poppy anthems. Indeed, the simple riff-rockers with call-and-response vocals are almost too deliberate as fist-pumping anthems, a little silly and on-the-nose, but that doesn't stop you from cranking up the volume and singing along anyway. Opener "Heaven" is a case-in-point, begging you to join in with the behests to "believe!" set to the tune of "The Lion Sleeps Tonight." "Soldier's Home" is melodic jangle pop, "Saint Jake" and "Dream Come True" are more rousing radio-ready rockers (John Cougar Mellencamp or Tom Petty for the college radio set), and "True Love" demands to be covered by your local bar band.

It's all great fun, and if the leather-clad East Coast punks on the cover almost seem to be donning musical cowboy costumes as a put-on, it doesn't make you want to come along for the ride any less.

The band had four really solid records from 1984-1990, all worth checking out, as well as a perfectly respectable 2013 reunion album. (There's a terrific, well-chosen greatest hits album from their original run, with improved sound, but I think it's out of print.)