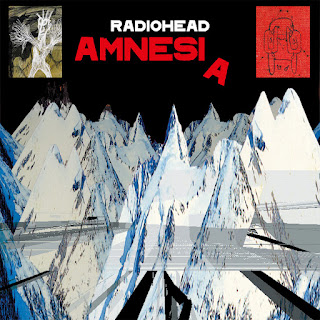 I've been at this thing for over three years now, and have yet to post any Radiohead, despite them seeming to be universally loved and admired.

Because, frankly, I'm just not a Radiohead fan.

Yeah, I find them kinda... boring. Which I say with the utmost respect. I don't mean boring as in the faceless corporate Top 40 bands out there. Their music is endlessly complex and innovative and worthy of respect... yet, nonetheless, I've never really made it through a Radiohead album without losing interest. There are some great songs, sure, and the makings of a decent mixtape. And I can't deny the amazing production and sonic dynamics, the headphone-filling ear-candy... but, what can I say? It's never really clicked.

Still, it's been a long time since I've given them a try. So I figured I'd try to cobble together something new that I might find interesting.

In 1999 and 2000, the band recorded a large batch of material that strayed from their more traditional guitar-oriented roots into electronica and experimental, ambient pieces. After toying with the idea of releasing an expansive double album, Radiohead decided to break the recordings into two separate albums: 2000's Kid A (critically divisive at the time but growing in esteem over the years) and its 2001 companion album Amnesiac.

I opted to take the opposite approach; instead of the everything-goes expansionism, I applied some editing discretion and culled the highlights into a single CD. I used last year's Kid A Mnesia (which paired both albums, along with some additional outtakes), as well as a few Amnesiac b-sides. 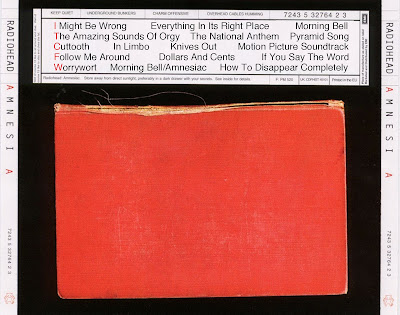 For my imaginary recreation, I dropped the instrumentals and the more abrasive, industrial-edged pieces, sticking with the (marginally) more melodic bits. I sequenced it in a way that mixed up the flow, interspersing the not-exactly-catchy-but-still-discernibly-tuneful numbers with the more atmospheric soundscapes, and did a little editing to shorten a few meandering codas. (My CD version is about 7 minutes shorter than the un-edited 72-minute Spotify playlist I created below.)

I think it's pretty good, an enjoyable conjuring of what might have been had they applied a bit of restraint and turned those 2000 sessions into a single disc. I dunno if it's gonna make me a Radiohead fan, but I'm kind of excited to spend some time with it.