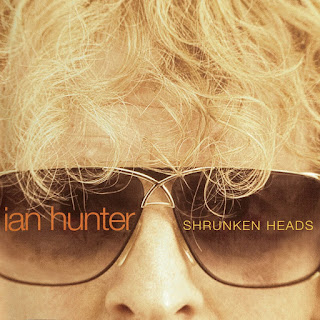 I'm a little torn on whether I like this album simply on its own merits, or because it just feels good to hear the former frontman of Mott the Hoople coming up with something so solid some 40 years into his recording career. Maybe a little bit of both?

As a longtime fan of both Mott and Hunter, I have to admit his post-Mott solo career is pretty hit and miss. Yes, he's got some tremendous singles--I'd say "Once Bitten Twice Shy," "Just Another Night," "Cleveland Rocks," and particularly my personal favorite, "All Of The Good Ones Are Taken," are at least as good as anything he did with his original band, and arguably better. But the long-players, that's a different story. Sure, there are some decent ones that pop up here and there in his discography (1979's You're Never Alone With A Schizophrenic was a particular standout); and his willingness to move among styles (from glam to new wave to post-punk to classic FM-band middle of the road rock) is admirable. But the quality could vary (and some of his 80s output, from the era's telltale production to cheesy synths, is pretty dated).

So Shrunken Heads, coming after a 6-year break since his prior studio album (the also pretty solid Rant), comes as a pleasant surprise. It's unusually consistent, peppered with great songs. The sound (occasionally an issue for Hunter) is top-notch. And while his vocals, already pretty Dylanesque way back on Mott's 1969 debut, are, like Dylan's, evolving deep into seasoned gruffness, they suit the content of the songs. There are some really catchy rockers, notably "Fuss About Nothing" and the rollicking "Brainwashed." "Soul Of America" is pretty striking, whatever one makes of this Brit's take on American jingoism; and "I Am What I Hated When I Was Young," similarly walks a dangerous line between "you kids get off my lawn" ranting and earnest late-life soul searching.

It may not supplant his Mott classics or some of those 70s singles and stand-out deep cuts, but for a guy who was approaching 70 at the time, it's a damn respectable piece of work.