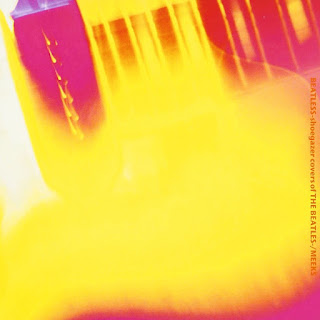 Yes, it's a novelty album whose title speaks for itself. Doesn't make it any less fun, though.

Meeks, as far as I can tell, were a one-time spin-off from a Japanese band called Broken Little Sister. (That band's lone album, 2010's Memories, Violet & Demons, is a perfectly fine blend of dream pop and shoegaze, and streams on Spotify if you wanna check it out.) As Meeks, they recorded 10 Beatles covers, all reworked to sound like they were recorded for My Bloody Valentine's Loveless. Washes of guitar noise, vocals slathered in reverb, a bit of tape manipulation here & there... you know what you're in for. Still, it's worth checking out if you're a fellow Loveless devotee looking for an interesting spin on the Beatles catalog.

Not surprisingly, the songs that were fairly trippy to begin with, like "Across The Universe," "Strawberry Fields Forever," and of course "Tomorrow Never Knows," work best, coming across like heavily tweaked updates. Hell, "Norwegian Wood" is probably more interesting than the original. The ballads, like "Yesterday" and "And I Love Her," are the most radically reworked, slow and dreamy, helping to break up some of the heavier tracks.

Sadly, you can't find the damn thing anywhere... it's out-of print (aside from overpriced used copies on Amazon) and the Spotify links are dead; presumably copyright issues. But someone ripped the entire thing to YouTube. Check it out before it gets yanked again!