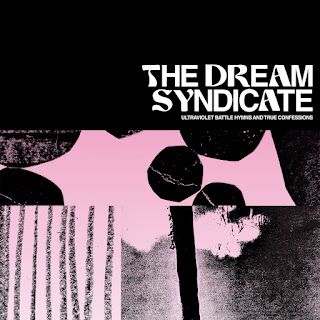 This one just dropped this morning, but the first spin already has me pretty excited, as Dream Syndicate Mark II continues its hot streak. As I noted regarding the band's 2017 return after a 30-year absence, Steve Wynn's reconfigured Dream Syndicate is the rare outfit which manages to regroup after an extended an absence and record music at least as great as their legendary original run. (Maybe Wire comes close? Their post-break-up discography is significantly larger than the original 3-LP output, though however solid a lot of the newer albums may be, they're not nearly as groundbreaking as that trilogy.)

Following 2020's trippy and jam-oriented Universe Inside, with its 5 extended jams over the course of an hour, Ultraviolet Battle Hymns and True Confessions--the unwieldy full title--returns to a more manageable, song-oriented format. There's a pretty even split between upbeat rockers (the catchy romp "Trying To Get Over," garage-rocking "Straight Lines," and the almost poppy "Every Time You Come Around") and the more ambient, psychedelic, Krautrock-tinged grooves, while opener "Where I'll Stand" finds a cozy middle ground. As with the other post-reunion efforts, the album is sonically rich and varied, drawing from the Yo La Tengo playbook, a feast of dense guitars bathed in reverb.

Great stuff, looking forward to delving in deeper this weekend. Buy it on Bandcamp.