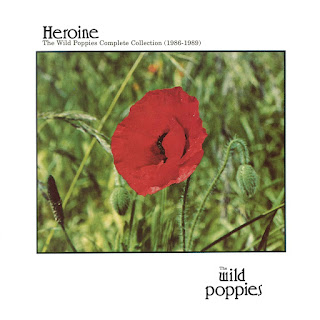 The one-and-done Wild Poppies were a short-lived mid-80s New Zealand indie band. They shared a sound with some of their better known peers in the Flying Nun scene like the Clean and the Bats--low-key, jangly pop that sort of shambled along, sweetly modest no-fuss indie rock. They released a single LP in 1986; a recent CD reissue (which streams, below) appends a bunch of singles and demos.

Most of the songs are quiet and pastoral, largely acoustic, though occasionally they'll weave in a bit more electric buzz (i.e. "Walkabout" and a few of the bonus tracks). Few songs make a dramatic impression, but that's not what they're shooting for, instead opting for that understated jangle that wafts off into the midday sun. Still, a couple tracks verge on hummable (opener "What Is Mine," "This Person"), while the instrumental "Canon Over A Green Sea," with its gentle strumming and soaring jam, could be a lost Feelies or Love Tractor outtake.

You can buy it here.

"What Is Mine" audio rip: