I don't know if "baroque pop" is a clearly-defined genre, but I tend to throw it around a lot. Though originally invoked for a brand of pre-psychedelic 60s pop which incorporated classical music (and harpsichords), I tend to think of it in terms of post-60s alternative power pop deeply indebted to the Beatles (particularly McCartney's compositions circa Sgt. Pepper and Magic Mystery Tour): melodic and slightly-psychedelic, dense production, frequent appearances of trilly pianos and harmonies, and just generally a bit more colorful and complex than standard three-chord power pop.

A few of my favorite purveyors of the style would include latter-day XTC (particularly their Dukes of Stratosphear project), Beagle Hat, the Pillbugs, Pugwash, and Jellyfish (particularly Roger Joseph Manning Jr.'s subsequent solo work). A few of the Elephant 6 bands (particularly Olivia Tremor Control, but also Beulah, the Minders, and the Apples in Stereo) may qualify as well.

But it's easier to say "I know it when I hear it" than to describe it. So I've made a mix. It's pretty damn great. 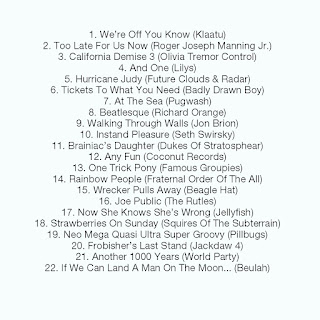 I've got a Spotify playlist below, but, alas, a few key tracks don't stream. So I'm also making a download available if you want to check it out; the link will inspire, so act quickly! Find it here.