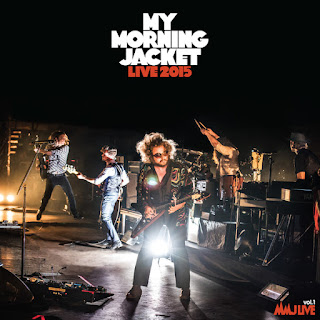 As I've repeated multiple times, My Morning Jacket remains one of my favorite live bands (both as an active touring unit and, frankly, ever). As much as I enjoy their studio recordings, their big, boomy sound needs room to breathe, and really benefits from a boisterous live performance. They do a masterful job infusing their Americana/jam band/indie rock hybrid with classic arena rock sheen.

While the band have shared extensive live recordings through their website and nugs.net, this new release (which just dropped this morning) is their second "official" live release. 2006's essential Okonokos was a classic "double live" right out of the school of traditional, obligatory classic rock live albums, and Live 2015 is similar--meaning it features highlights from multiple shows rather than an actual start-to-finish concert. That makes it a much better entry-point for newbies, cherry-picking fan favorites and shedding the diehard-friendly deeper cuts (but, alas, you don't get any of the terrific covers they sometimes pull-out, like their loving takes on "Purple Rain" or "Rocket Man" or "Can't You Hear Me Knocking" that spice up a set).

The new one is apparently the first in a planned series of vinyl releases (not being a vinyl guy myself, I haven't seen a CD version hit the market yet, though it's streaming digitally). And it's amazing, maybe even better than Okonokos. The sound is impeccable, of course, doing justice to some epic performances. They have a few holdovers from earlier days--most notably the always-riveting "Off The Record" (with its riff-rocking, fist-pumping structured pop song blasting off into a Floyd-ish exploration) and extended jam masterpiece "Dondante." But it's built primarily from the three (excellent) albums released post-Okonokos (Evil Urges, Circuital, and The Waterfall). Circuital's title track has long been something I've loved hearing live, so it's great to have it on record. And the funky "Touch Me I'm Going To Scream, Pt. 2" is another one that really lets loose with sonic abandon on stage.

You can buy the vinyl here, or check it out on Spotify. Meanwhile, here's a live clip of "Circuital" circa 2019: