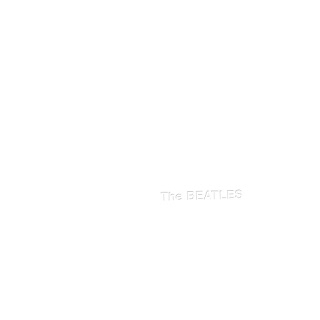 With Sir Paul turning 80 this week, I figured I'd follow up yesterday's very Beatlesque/McCartneyesque mix with a proper Beatles album.

I've always had a deeply personal relationship with the White Album. It's not my favorite Beatles album; that spot has long been held by Abbey Road. And I probably prefer Sgt. Pepper as well. But the White Album is just a wonderful, sprawling, perfect mess of a masterpiece.

The White Album was the first "real" Beatles album I bought as a kid. Before that, I had picked up their 1976 compilation Rock & Roll Music, which came out when I was 10, not long after I had developed my early obsession with pop music. That one was, frankly, kind of a disappointment; I had started to grasp that the Beatles were somehow important, certainly more important than the Top 40 hits of the days I was following, but the record's focus (per its title) on the band's more straightforward rocking numbers (which are probably my least favorite Beatles tunes) didn't really clue me in on their greatness.

Not long after, I stumbled across the "Blue Album," their collection of '67-'70 singles that was all but indispensable as an introduction to the band, and that one more than made up for the disappointment of Rock & Roll Music, a perfect encapsulation of everything great about the Beatles. (I was less partial to the "Red Album," compiling their earlier hits, and to this day rarely listen to pre-Revolver Beatles very often.)

Once the Blue Album won we over, it was just a matter of saving enough money to start digging into their non-compilation studio albums. I ended up starting that journey with the White Album, an expensive option but one which seemed enticing because it promised so much new material with which I was totally unfamiliar at the time.

Just opening the package was exciting. It was white colored vinyl, pretty cool looking. Plus there were four small posters of the individual Beatles, which immediately went up on my wall (alongside the Suzanne Sommers and Farrah Fawcett posters--yes, I was in full-on horny pre-teen mode at the time). But I was totally unprepared for the music. It was just so... weird. I knew a couple of the songs from the radio and those hits collections ("Back in the USSR," "Ob-La-Di, Ob-La-Da"). But there were plenty of songs here I liked far better. And the songs were just so different from one another stylistically. I adored the strangeness and silliness of tunes like "Bungalow Bill" and "Happiness Is a Warm Gun" and "Rocky Raccoon," the catchiness of "Dear Prudence" and "Sexy Sadie" and "Martha My Dear" and "Cry Baby Cry," the rawness of "Helter Skelter" and "I'm So Tired" and "Everybody's Got Something To Hide."

And of course there was plenty of stuff I wasn't so crazy about--the abrasive "Why Don't We Do It In The Road" and "Yer Blues" and "Wild Honey Pie," the artsy sonic experimentation of "Revolution 9"--but even those made the listening experience more interesting. The Beatles were the perfect band yet still imperfect, willing to fuck around in the studio and take chances, and even if the songs didn't always make sense to an 11-year-old kid whose musical frame of reference was still defined by Sweet and the Bay City Rollers, I could sense the bold, twisted logic of juxtaposing "Why Don't We Do It In The Road" with "I Will."

But mostly I loved the White Album because it confirmed that the big hits were only the tip of the Beatles iceberg, and there was a whole universe of Beatles music I still needed to discover and even the deepest tracks that never made it to the local classic rock radio stations were gonna be amazing.

These days, like other multi-LP sets (the Clash's Sandinista comes to mind), I have less patience for the lesser tracks; I can appreciate their value to the artists' vision, but when listening time is scarce I just don't need to work my way through them. So I've got a handy condensed version of the White Album on my iPod that omits those less-beloved tracks noted above, and it works just fine for regular rotation; but this doesn't mean I don't treasure the whole album as is.