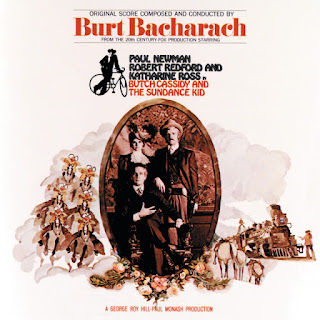 In honor of Father's Day, thought I'd mix things up with my own version of dad-rock.

As I described in my book (and you can read the excerpt here, in my discussion of Paul & Linda McCartney's Ram), I grew up in a rock-free house. My dad has never been a fan of rock music (or, for that matter, pretty much anything remotely contemporary). As a kid, all we had were 8-track tapes of easy-listening artists and soundtracks--the Carpenters, Herb Alpert & The Tijuana Brass, those weird Enoch Light bachelor pad faux-jazz records. I think a bit of Joni Mitchell and the Mamas & the Papas slipped in, and, as noted, that somewhat inexplicable copy of Ram.

I distinctly remember the Butch Cassidy soundtrack being on heavy rotation. And, probably more than most, it's the one that has really endured for me, something I still play (unironically, as opposed to those Enoch Light records) from time to time. It's certainly the least rocking thing I can imagine. It's mostly instrumental, jazzy Burt Bacharach tunes, with one random exception, the B.J. Thomas-sung "Raindrops Keep Falling On My Head," played anachronistically in the 1890s-set film.

For all its easy-listening schlock, there is something I find emotionally resonant about the music. Despite a couple tunes that move at a brief clip (most notably the delightfully cheesy "South American Getaway," with its insistent, horribly dated but sublime ba-da-ba vocals), most of the melodies are tinged with sadness. I don't know if that's something I'm hearing because of the music's association with distant childhood, or perhaps the affiliation with the film (which I didn't see until some years later), which is also, for all the fun of seeing peak Newman/Redford, an inherently sad and wistful picture.

Anyway, I'm not sure if this music would have the same emotional connection for someone who doesn't have the early childhood connotations (or at least a shared love of the movie), but it's one that, for me, has evolved from guilty pleasure to a real love.

Notably, the Spotify version of the record omits "Raindrops" (and its reprise), presumably for licensing reasons, but the song is available separately so I created a playlist to squeeze it back into the running order (albeit without the jazzed-up reprise).