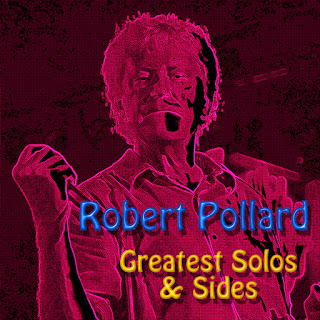 Guided by Voices fans, stick around--this was a serious labor of love, and I think you're gonna thank me for it. (Everyone else, take a quick walk around the block, grab a Twinkie, go spin the new Wilco, we'll catch up later.)

Like (I assume) most GbV fans, I previously put together a compilation that captures the highlights from the band's lengthy run, countless albums and EPs, finding the choice nuggets buried amongst the sometimes seemingly haphazard meanderings. (My current version is a 3CD set, last updated a few years ago; it's on Spotify, and includes not just proper GbV tracks, but a few choice solo tracks from frontman Robert Pollard and on-again, off-again band member Tobin Sprout.) I've also got a nifty collection of Tobin Sprout tunes, both solo and with GbV.

But until now, I've been too intimidated to attempt a Pollard solo mix. Beyond just the records under his own name (which approach in number the GbV catalog), he's got a dozen or so side projects, some one-offs, others which are pretty prolific in and of themselves. And if GbV could often benefit from some editing, Pollard's solo efforts... well, let's just say that pretty much every musical (or non-musical) thought that has crossed his mind has found a home. Some albums are fully polished, like long-lost classic rock works from Bizarro Earth; some are deliberately difficult. The solo & side project stuff is particularly given to Pollard's more experimental musings, at times coming across like the work of a reclusive genius who grew up owning nothing but Captain Beefheart and Shaggs records, with maybe one scratched-up Beatles LP for the sake of variety.

Still, Pollard's knack for finding the perfect hook is undeniable, and there are a ridiculous number of strangely wonderful songs to be found here; it just takes a lot of work. (And a lot of cash.) Solo numbers like "Pop Zeus" and "Subspace Biographies" are as good as (or better than) anything bearing the Guided by Voices tagline.

So here's what I've come up with: a double-CD set drawn from his solo career and side projects (some more than others; I'm particularly partial to Boston Spaceships and Airport 5 and his one-off collaboration with late power pop legend Tommy Keene, the Keene Brothers). Amazingly, it all streams on Spotify, so I've been able to put together a playlist for you to check out. (For my CD project, I did a bit of editing to cut out some extraneous bits, but obviously that's not an option on Spotify.) 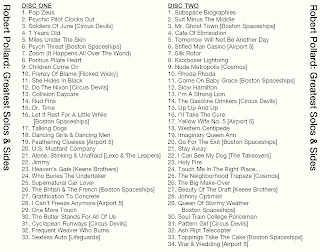 As I know from that time I shared my GbV Top 10 on Toppermost, every GbV fan has their personal favorites, which tend to vary widely. So diehards will undoubtedly have a different view of Pollard's peaks; me, I prefer the most pop-friendly tunes, so that's what you'll find here.