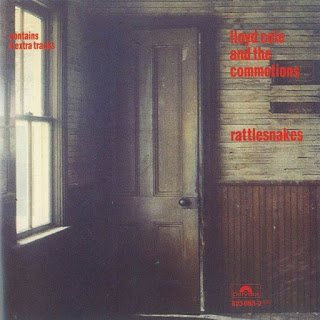 Lloyd Cole is one of those amazing artists who's been around forever, yet I kinda take him for granted. I dutifully acquire his music, give it a quick spin, and it'll continue to show up in shuffle mode, but I rarely wake up in the morning thinking, hey, I think I'll play that Lloyd Cole record. Which is kinda crazy, because there's all sorts of greatness in his catalog.

The British singer's 1984 debut, with his band The Commotions, was a blend of '80s college radio jangle pop and the more international version of the same, shades of the Pale Fountains and Go-Betweens and Hoodoo Gurus. Really pretty, melodic stuff, given a bit of emotional, melancholy heft by Cole's cool croon, which weaves in a touch of Television or The Only Ones, or maybe Bryan Ferry.

Anyway, just a quick hit today, gotta run, but it's a wonderful record (as is so much of what he's done since). If you're not familiar with Lloyd Cole, start here and open some doors.

And the title track:A live take on "Speedboat":